Rick loved and captained Olympus from 2008, up through 2017 when she was sold to an East Coast owner.

Owner Diane Lander was passionate about the boat, and, in addition to lengthy summer cruises throughout the Inside Passage, attended every classic and wooden boat festival possible.  At these events the yacht was opened for touring by the public, giving people a glimpse of the Golden Era of Yachting. Rick worked tirelessly with Diane, to maintain and improve the yacht to the highest standards.

M.V. Olympus, a 1929 fantail motor yacht, was originally christened Junaluska, and was built for George Heck, then President of the New York Stock Exchange.  Built on the Hudson River by New York Yacht, Launch & Engine Co., she served several owners on the East Coast before being brought out to California by silent movie star Anita Stewart.  Like many large vessels, she served in the military during World War II, when her beautiful brightwork was painted navy gray and she patrolled the Northwest coastal waters.

After the war she was acquired by the State of Washington Department of Fisheries for the stated purpose of serving as a fisheries patrol vessel, but was in fact used as yacht by Governor Mon Walgren.  He re-christened the yacht "Olympus" in a ceremony held at the Rosario mansion on Orcas Island. During the State's ownership, President Harry S. Truman and other political dignitaries were aboard many times. The yachting expenditures were carefully hidden in the Fisheries Department budget until some aggressive investigative reporting brought to the public's attention that over $100,000 had been spent refurbishing the yacht. Walgren lost his bid for re-election, and the new governor immediately ordered the yacht sold.  From that point forward Olympus has been privately owned and operated in Washington State.  She was sold to a New York owner in 2016. 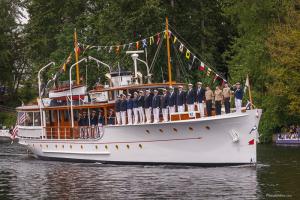 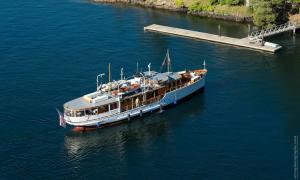 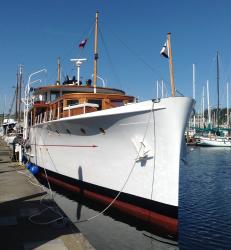 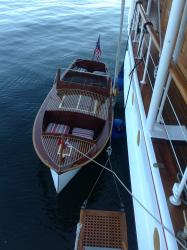 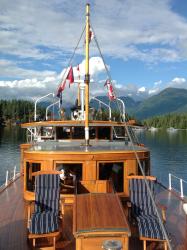