I began work on Malibu in the 1990’s when she was owned by the Foss Tugboat Company. They used her for company excursions (Husky football games, etc.) and owner cruises. I engineered the installation of stabilizers and a bow thruster, and engineered a new rudder design.

I also created CAD arrangement drawings to document changes made.  To assist with this, I contacted the refit designer Lynn Senour (famous for designing the Nordic Tug line), who turned out to be a neighbor of mine, only a couple blocks away in North Seattle.  Lynn pulled out his files and we spent quite a few hours going over them, interspersed with his fascinating stories from his extensive design career.

In 1999, Foss brought the Thea Foss out of mothballs and sold Malibu. I did some consulting for the new owner on a few changes as they upgraded the yacht for family cruising.  Then, on July 3rd 2002, tragedy struck when Malibu tangled with a rock near Wasp Passage in the San Juan Islands, simply as a result of an error by the captain.  Fortunately owner, guests and crew were safely rescued but the yacht sank to slightly above the main deck level.  She did not sink into deep water so was salvaged, and about a year later was re-launched.

In 2014 I was hired to captain and maintain the yacht. There was quite a bit of deferred maintenance, although the cosmetics had been kept up. I organized and oversaw a series of lengthy yard periods where most of her hull was re-framed and re-planks by Haven Boat shipwrights in Port Townsend, WA. Many mechanical and electrical upgrades were accomplished as well. It is my hope the yacht will continue to be kept up by her next owners, as she approaches her one-hundredth birthday in May of 2026.

Malibu was designed by Ted Geary and by Blanchard Boat Building Co. with sturdy Douglas Fir sawn frames on 16" centers, and planked with 2.5" Port Orford yellow cedar.  She is 100 feet OAL, with LWL of 95 feet, beam of 19.5 feet and draft of 7.5 feet.  Malibu's original 4 cylinder diesels have been replaced twice, now with Cummins diesels, cruising at 10 knots with a range of over 2000 miles.  She has the classic Ted Geary fantail stern.

Malibu was originally built for the Adamson and Rindge families, who owned a ranch in Southern California called "Rancho Malibu". The property was only accessible by boat or by horseback, and Malibu was often seen anchored offshore there. The families cruised the yacht up and down the coast from Alaska to Mexico. With the completion of the Pacific Coast Highway in 1929, Rancho Malibu was gradually parcelled off to become the present day city of Malibu, California.

The third owner of Malibu was George Hamilton, founder of Hamilton Propeller Company, known for building propellers for the Boeing Airplane Company.  Mr. Hamilton cruised the yacht to the Pacific Northwest, and bought property at the entrance to Princess Louisa Inlet, a remote inlet of stunning beauty.  There he built a luxury resort in an attempt to cater to Hollywood movie star types.  He named it "Malibu Resort" after the yacht, and also named the rapids at the entrance to Princess Louisa Inlet "Malibu Rapids", the name on the charts to this day. The resort never really caught on, and was abandoned in teh 50's, when the Young Life Christian Youth group bought the property.  Malibu Camp, as it's now know, has been a thriving Young Life camp ever since.

Malibu was purchased by Wells McCurdy in 1973 and totally reconfigured under the guidance of yacht designer Lynn Senour. He raised the wheelhouse to the upper deck and repowered her.

From then on, she has resided in the Pacific Northwest, as a charter vessel (along with Olympus), and as a corporate yacht for Foss Tug Co. and Windermere Services Co.

This yacht is now available. 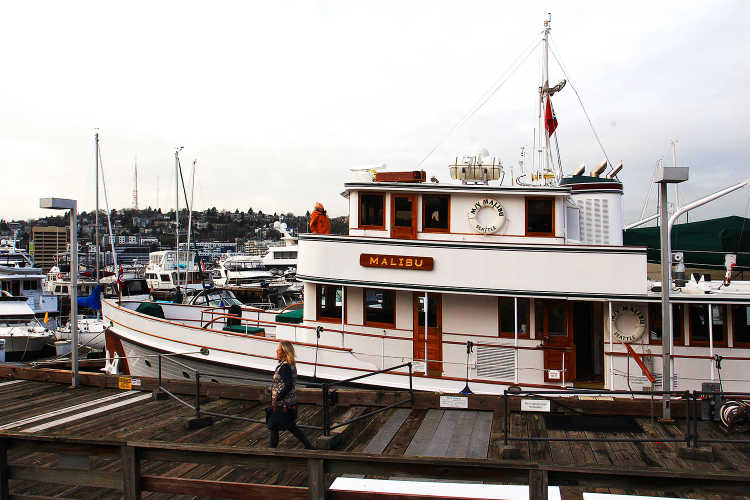